Thespiana runs this weekend at Cottonwood Center for the Arts 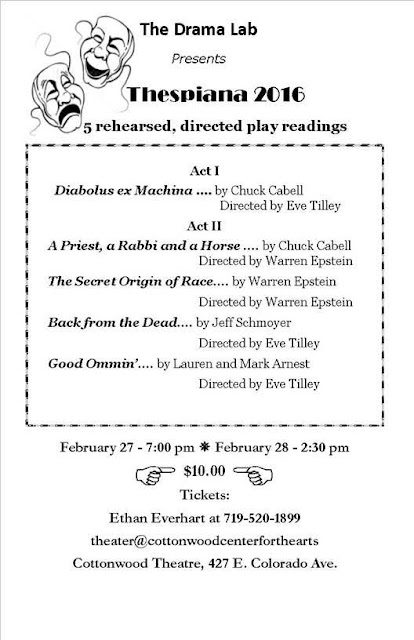 Come out and support your fellow Drama Lab members this weekend at Thespiana, a staged reading of five new plays at the Cottonwood Center for the Arts. The theme is "comedies with a twist" as each play gives a dark and somewhat cockeyed view of the way we live today.

Writers include Drama Lab regulars Chuck Cabell and Jeff Schmoyer, both of whom are getting a staged reading for the first time, as well as Warren Epstein and Mark and Lauren Arnest. Actors include our own Sue Bachman, Roy Kieffer, Sallie Walker,Désirée Myers, Robert Tiffany, Greg Lanning, Elizabeth Kahn and Mike Miller.

I hope to see you there!
Posted by Todd Wallinger at 5:05 PM 0 comments

We're still digging out from the snowstorm that hit last week but had a decent turnout for last night's meeting anyway. Ten people showed up and we read through 4 plays.

We opened with a rewrite of a scene from Sue Bachman's drama Ladies of the Chameleon. In this scene, two older women discuss their experiences getting defrauded by their romantic partners, only to discover that they were defrauded by the same guy. People liked the twist at the end but thought that the buildup was too long for the payoff and that the whole thing could benefit from some tightening.

Next up was Chuck Cabell's short comedy, Come Here Often? The play is set in a bar that is located in Heaven and is frequented by a variety of angels and demons. Gabe (the archangel Gabriel) is retiring and the others fight over who gets control of his human. The audience thought the play had an interesting premise and was very witty, but some felt that it bordered on preachy at times.

After that we read two more scenes from my Frank Capra-inspired comedy Trouble in Paradise Junction. Here we meet Wink Smiley, the self-absorbed host of the reality show that has come to town. We also see how he manipulates the conversation to drive a wedge between two of the town's families. There was some discussion about whether that conflict was revealed too soon.

We finished up with the beginning of Tim Phillips' comedy Seth and Tracy, also set in a bar. In it, a woman tries to make a connection with a guy who is writing at the bar, only to go off with another guy when she gets rebuffed by the writer. Everyone liked it and thought the characters were well-defined.