The Liar opens next week at TheatreWorks 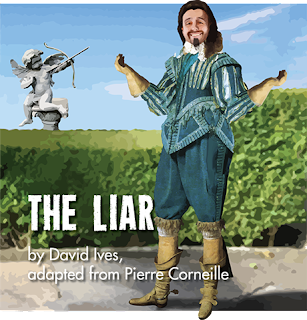 A reminder that The Liar opens April 23 (the Bard's birthday!) at TheatreWorks. This is a wonderful adaptation by David Ives of Pierre Corneille's 1644 masterpiece. The Liar is a hilarious farce about a charming young rogue with an unmatched gift for stretching the truth--and the troubles he gets into when he meets the woman of his dreams.

The play runs through May 10. Showtimes are 7:30pm Wednesdays through Fridays, 2pm and 7:30 pm Saturdays (no matinee on April 25) and 4pm Sundays.

Also the associated Prologue Lecture promises to be a fun one. Bill Lepp, fine-time winner of the West Virginia Lying Contest leads a workshop on how to tell whoppers. That's at 2;30pm on Sunday, April 26 in the Dusty Loo.

Or at least that's what we were when our April meeting started last night at 7pm. Eight people were there, but those eight included all six of our writers and two dedicated members who normally participate as audience members. And that's a problem because we had an unusually large number of large-cast plays. Later, a couple of our talented actors did show up shortly after the meeting started, and we were able to make the readings work by doubling up on the 10 people who attended the meeting. (Of course, some of our writers are excellent actors as well. You know who you are!)

But seriously, we need more actors. If you're an actor, and you've never attended one of our meetings because you weren't sure how much reading you'd get to do, let me tell you now: you'll get a lot.

The good thing is that our discussions were longer and more constructive than last time. At the beginning of the meeting,I had suggested that we try to target 5 to 10 minutes of discussion per play and we hit that target well, wrapping up the meeting around 9:30PM.

We read six plays, starting with a couple of scenes from Sue Bachman's relationship drama Having Faith. Sue rewrote the scenes to make the adult daughter less mean. It worked, and the daughter, while still frustrated by the infirmities of her aging mother, is at least somewhat sympathetic now. Special kudos to August Mergelman for bringing the mother to hilarious, spunky life--Brooklyn accent included.

We next read the beginning of August Mergelman's youth play A Commedia of Pairs, a funny mash-up between the Plautus's Menaechmi and Shakespeare's The Comedy of Errors. Everyone loved the humor, feeling that he only thing to fix--and August agreed wholeheartedly--was the title, as the current one is a bit clunky sounds more like a sub-title than a main title.

After that we read the beginning of Deirdre Gilbert's family comedy Capsaicin. In this play, a father and son struggled to get the cranky; judgmental mother to enjoy a family vacation on a South Carolina island. The audience said that the characters all felt very distinct and well-drawn. Deirdre was still trying to make up her mind whether to make the family Southern or something else, and by the end of our discussion had pretty much decided to give them a Midwestern flatness.

Next up was the middle section of my cocktail party farce Butterfly Effect. Here things are rapidly going from bad to worse as Philip and Roddy sneak a string of ancient rescue flares outside so that they can launch them. People liked the humor and pacing, and did not seem to have any issues with the few Americanisms in the script as it made the dialogue more approachable.

We then read the end of Chuck Cabell's medieval fantasy Jurgen the Pawnbroker. Everyone liked how the book wrapped up with Jurgen returning to his loyal--if shrewish--wife, deciding to be satisfied with his lot as it was. Some people felt that his moralizing at the end was a little heavy-handed, but others thought this fit perfectly with the medieval setting of the story.

And we finished up with a rewrite of Tim Phillips' Prohibition-era romance, Abigail Finds Love. The story continues to get better with each version, with the audience really liking the scene in which Abigail knocks out her arrogant husband by tainting his food so that she could have a rendezvous with her lover, the charming piano player Paul.

Our next meeting is Monday, May 11. See you then!