I'll be directing the world premiere of my old-time radio farce, The Last Radio Show, in January. Auditions are scheduled for 1:00pm to 4:00pm on Sunday, October 18 at Library 21c in Colorado Springs. For complete information about the auditions, please visit the play's blog.
Posted by Todd Wallinger at 1:50 PM 0 comments

Email ThisBlogThis!Share to TwitterShare to FacebookShare to Pinterest
Labels: The Last Radio Show

Last night we had out first meeting in the Dusty Loo Bon Vivant Theatre, just steps away from the elegant set TheatreWorks created for their production of Noel Coward's Private Lives. The ambience was fabulous--we're ina real theatre now!--although it appears that we still have to figure out the seating. For this meeting, we set up chairs in a row in front of the house seats, and while that made it easy for the audience to hear and see the actors, the actors themselves complained about not being able to hear each other. Some alternative seating arrangements were suggested and we will be exploring these in the next few weeks.

We had a decent turnout, with 12 people showing up, including our newest writer Rebekah Shardy, as well as TheatreWorks' new managing director Will Prenevost, who has extensive experience in acting and promises to bring some of his own writing to future meetings.

We opened with the beginning of Tim Phillips' historical drama Celtic Warrior Queen. In it, real life figure Bodica tries to inspire her subjects to revolt against the Romans, with the would-be queen finding her greatest opposition in the practical-minded gladiator Lugaid. The audience liked the Shakespearean scope of this action-packed story. Tim said that he doesn't have a theme that he's working towards but expects one to naturally come out of the work by the time he's finished.

After that we read some pages from August Mergelman's A Comedy of Pairs. August originally intended this commedia dell'arte twist on Shakespeare's A Comedy of Errors to be one of his series of show plays exploring world theatrical traditions, but in writing it, he found he had so much material that he decided to make it a longer, standalone play. Here we see Dottore hypnotizing Pantalone's jewel-crazy fiancee Adriana to make her less materialistic. The humor was great and the characters well-drawn.

We followed that with Rebekah Shardy's An Honest Woman, which was inspired by the life and writings of Dorothy Parker. The play featured an array of quirky characters including Death, an outspoken evangelical housewife, actor/writer Robert Benchley and a version of God inspired by 1920's jazz singer Josephine Baker. Rebekah did a great job hitting the high points of Parker's life while maintaining Parker's wonderfully snarky tone throughout. I'm sure everyone is looking forward to seeing more of Rebekah's work.

Next up were some more pages from my old-time radio farce The Last Radio Show. Here we heard an episode of Clint Hazard, Wardrobe Detective in which the stalwart gumshoe tries to find out who's responsible for a woman's missing sock. After that, the hapless radio crew loses another actor as Maureen suffers a debilitating allergy attack. People liked the fast pace and the humor, although there were several gags that could be tweaked and at least one anachronism that I may or may not keep (Kenny G?).

We wrapped it all up with the first scene of a Time to Live by Howard Kirstel. Howard has participated as an actor for several months now, but this is the first time he has brought his own writing. Not only is he a talented writer, but he's a gifted pianist as well and he put those gifts to good use in this work, creating a musical that explores a family that is threatened to tear apart on the eve of the daughter's wedding. Everyone enjoyed the mixture of poetry and prose, with the poetry serving as the lyrics of the songs which Howard says he has already written.

Our next meeting is in just three weeks. I look forward to seeing you all on Monday, October 12.
Posted by Todd Wallinger at 9:31 PM 0 comments 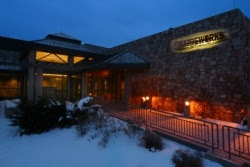 Exciting news! Thanks to the generosity and support of TheatreWorks, especially their new managing director and Drama Lab member Will Prenevost, our group will now be meeting in...

The classroom served us well for a year and a half, but I'm excited about our move into the Big Room as it represents a whole new level of commitment from TheatreWorks and should make our readings a whole lot more professional and fun.

Of course, the Dusty Loo is a busy place, so from now on, we're going to need to be flexible with our meeting dates. The second Monday of the month will continue to be our default date. However, I may move the meeting forward or backward a week as needed to get the theatre.

Our meeting dates for the next six months are:

As always, the latest info for the next meeting is shown on the right side of this page.
Posted by Todd Wallinger at 3:32 PM 0 comments 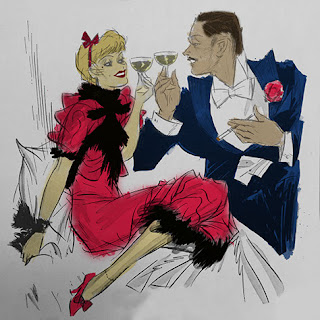 Next up on TheatreWorks's season is the classic Noel Coward comedy, Private Lives.The play offers a biting and hilarious look at modern relationships as it follows a divorced couple forced to reexamine their failed marriage after booking adjoining rooms with their new spouses on the French Riviera. Showtimes are 7:30pm Tuesdays through Fridays, 2pm and 7:30 pm Saturdays (no matinee September 12) and 4pm Sundays through September 27.

This month's Prologue promises to be a special one. John Lahr is perhaps most famous for being the son of actor Bert Lahr, who played the Cowardly Lion in The Wizard of Oz. But he's also a respected show business personality in his own right as the longtime theatre critic for The New Yorker and biographer of such theatrical luminaries as Noel Coward and Tennessee Williams. A discussion Lahr starts at 2:30pm on Sunday, September 20 in the Dusty Loo Bon Vivant Theatre. Afterwards, Lahr will sign his new book, Joy Ride: Show People and their Shows, a behind-the-scenes look at some of the most important playwrights of the last 70 years. 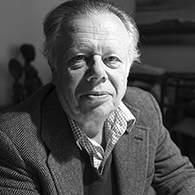 Posted by Todd Wallinger at 10:29 AM 0 comments