Staged reading of ISABELLA & THE DUKE on Aug 30

This Saturday, Black Box Theatre will present a staged reading of August Mergelman's new play Isabella & the Duke, a lighthearted adaptation of Shakespeare's Measure for Measure.

The play is a humorous satire about the Duke of Vienna, who leaves the city in the hands of his deputy, only to disguise himself as a friar so that he can spy on the city in his "absence". The cast includes Drama Lab regulars Karann Goettsch, Teri McClintock and Jenny Maloney.

The reading is at 7pm on Saturday, August 30 at Black Box Theatre, 1367 Pecan St. Tickets are $10 or pay what you can. All proceeds will be used to help Black Box with the repairs they've had to make this year.

I hope you can all turn out to support August, Nancy and the rest of the gang!
Posted by Todd Wallinger at 4:21 PM 0 comments

Staged reading of PACT FOR A STRAY CAT on Aug 23 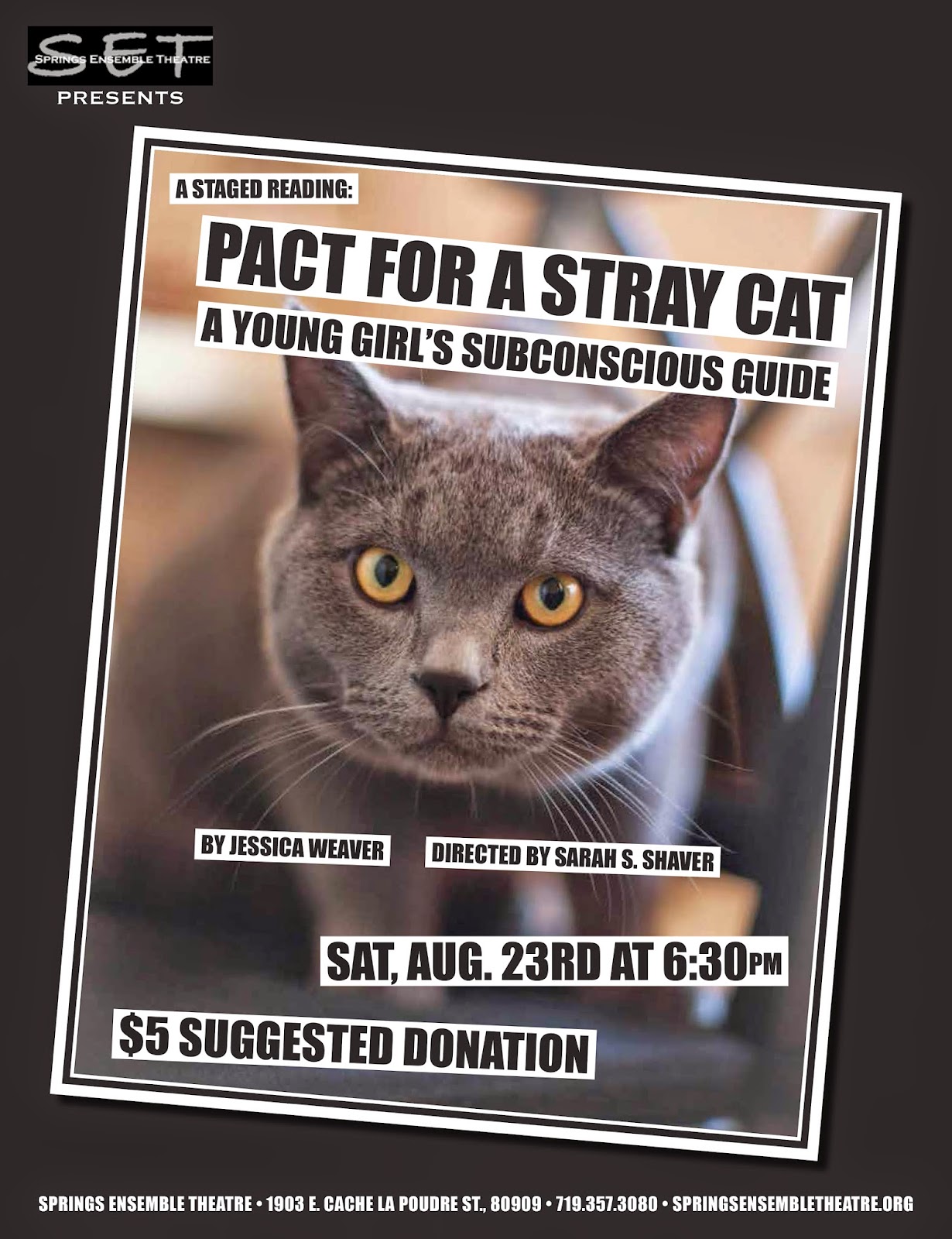 This is a big deal as this is the first time SET has performed a reading by a local playwright. If they get a big turnout, they'll do more. And next time, it may be YOUR play they do.

Pact for a Stray Cat is about a troubled teenage girl who seeks a partner for a suicide pact. The play was developed at the Drama Lab, and anyone who attended the meetings in which it was read knows how innovative and powerful it is.

Hope to see you all there!
Posted by Todd Wallinger at 4:42 PM 0 comments

Well, the illustrious Murray Ross, founder and artistic director of TheatreWorks, discovered us last night. Apparently, as he was leaving the Dusty Loo (you know, that would take on a whole new meaning if you didn't capitalize it), he saw his old friend Chuck Cabell waiting for our meeting to sbegin and went over to talk to him. Chuck must have done a good sales job because Murray wanted to sit in and see what we're about but was unable to do so last night. I fully expect we'll see him pop up soon.

Likewise, we were discovered by somewhere less famous, perhaps, but equally important person, a young woman named Nicole who'd been looking for an adult acting class and, finding that there was none in town, decided to give us a try. She provided lots of great feedback to the playwrights and we can convince her to participate as an actor in the future.

And that, I think, has been the key to our growth. As word gets out about our group, both long-time theatre personages and newbies are discovering us and both, it seems, are able to fell at home with us. If there's one thing I am most proud of about this group, it is that.

Needless to say then, we had another full night. Twenty-one people attended and we read six plays, including one from our newest writer Anne Krill and one from Chuck, who came to our first meeting three years ago and hasn't been back until now.

We opened with two new scenes from Tim Phillip's Prohibition-era romantic drama Notes from the Heart. Here the obnoxious millionaire suffered a well-deserved heart attack, while a mysterious figure arrives to interrogate piano-player Paul about his relationship with the rich but unhappy Abigail. The audience liked these scenes a lot but felt the conflict could be heightened even more.

After that we read a new scene from August Mergelman's adaptation The Tragedy of Dracula, in which Van Helsing begins to grow suspicious of the vampire. August has given the material a fresh twist by making Van Helsing a woman, and Ashley Crockett's expert portrayal brought out all the wit and charm in the character.

We followed that withsome more pages from Deirdre Gilbert's dystopian comedy By Hook or By Crook, By Nook or By Book. This time the work took a decidedly darker turn as our heroine is questioned by a nosy government inspector, but Deirdre did a great job maintaining a humorous undercurrent throughout. Audience members suggested some tweaks to amp up the humor, especially around the heroine's efforts to hide her book in a laundry basket.

Next up was the opening of Chuck Cabell's play Diabolus Ex Machina. This full-legth comedy is about a struggling writer who discovers his computer has a mind of its own and proceeds to battle the machine over the plot of his new book. Everyone seemed to agree that the play was a hoot, injecting clever humor into a smart commentary on contemporary literature and the creative process.

We then read the latest pages from my museum farce, I Want My Mummy. Here the pushy reporter gets locked in the sarcophagus, and her frantic rapping on the lid leads the other characters to believe that an angry mummy is inside. The audience was a great help in identifying places where the pace slowed. In particular, a couple of characters were too chatty when talking to themselves.

The evening wound up with Anne Krill's reading of her own play, And A Shall Leave. This was an experiment as in the past I've discouraged writers from performing their own pieces. I want the Drama Lab to focus on the writing, not the performance. But this was a special request from Anne as she had received extensive notes from Ashley Crockett the night before, leaving her script an indecipherable mass of scribbles.

In any case, her performance was like a bomb going off. The play is a stream-of-consciousness memoir based on Anne's own experience as a child molested by her father, and no one in the audience breathed as Anne went from gentle to raging to gentle again in a heartbeat. The script has a lot of work ahead of it--the audience agreed that Anne needs to give it a stronger spine--but I think everyone was left deeply affected by the rawness of her emotions.

Our next meeting is on Monday, September 8. See you all then!
Posted by Todd Wallinger at 4:35 PM 0 comments