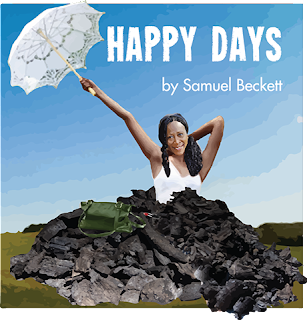 We're all familiar with Waiting for Godot, but how well do you know Samuel Beckett's other works? Well, you can find out next week as the playwright's Happy Days opens at TheatreWorks. It's a bleak, surreal play featuring a talkative woman half-buried in trash.

The play runs March 21 to April 5. Showtimes are 7:30pm Wednesdays through Fridays, 2pm and 7:30 pm Saturdays and 4pm Sundays.

For this month's Prologue Lecture, Murray Ross and Kevin Landis will lead us in a discussion of the absurd twists and turns of Beckett's genius.

I hope to see you at both!
Posted by Todd Wallinger at 4:56 PM 0 comments

We set our clocks ahead on Saturday, which means it was still light out when we gathered last night for our monthly meeting--always a welcome change. The weather was nice too, sunny and cool but with the promise of spring in the air. Living in Colorado, we know there are some snowstorms still ahead of us, but after the cold winter we've had, we'll take any relief we get.

And that may be the reason we had such a healthy turnout last night, with 16 people showing up--the most we've had since September. We also had a lot of scripts--seven, to be exact--which we got though at a healthy clip, wrapping up the meeting around 9:30pm. Of course, it helped that discussions were kept to a minimum. I don't know whether people felt rushed or they just didn't have any comments to share, but I plan to encourage meatier discussions in the future.

We opened with August Mergelman's original folktale Tricky Tommy and the Tuffet Monster. In line with his published work for schools, August is trying to put together a collection of short plays for students exploring different cultures and theatrical traditions. Here we see a tricky spider using reverse psychology to dissuade the other spiders from eating the big juicy fly he has his eye on. Everyone enjoyed the humor and the sassy dialogue.

Next up was Grant Swenson's short comedy Yes-man, in which a stressed-out engineer learns to take control of his life. The audience loved the lively dialogue and the realism of the characters, with more than one attendee saying they've known people just like them.

We then read the first half of Deirdre Gilbert's one-act drama A Frame of Mind. As her entry to the FAC's Rough Writers Contest, it's centered around artist Georgia O'Keeffe, in particular the time that photographer Ansel Adams took her and the Rockefellers on a camping trip. The play had a lot of humor and heart, especially in the conflict between the haughty O'Keeffe and the more down-to-earth Rosa, an Hispanic guide who Deirdre invented for the piece.

After that we read more of Chuck Cabell's Jurgen the Pawnbroker, running out of time just a few pages from the end. The witty dialogue continues here as we see the clever Jurgen con his way into becoming emperor, pope and then, for a brief time, God, before deciding that the latter role wasn't for him. Lots of fun, as always. People especially liked the elevated, very theatrical language throughout.

We followed that with a rewrite of the beginning of Tim Phillips' Prohibition-era drama Abigail Finds Love. This part neatly sets up the budding romance between Abigail, the wife of a wealthy industrialist, and Paul, a struggling piano player. Many people remembered the original version and thought this version was much stronger and tighter. The characters were also richer, with Paul being more interestingly ambiguous now.


Next we read another scene from my cocktail party farce Butterfly Effect. In this scene, a disastrous chain of events is launched when the neurotic Philip randomly tosses the olive from his martini. I was concerned that some of the actions might be too over-the-top, but the consensus was that this kind of thing is expected in a farce. The audience said they loved the humor as well as the breakneck pacing of the piece.

We finished up with Sue Bachman's short drama Georgia on his Mind. This was also written for the FAC Rough Writers contest but focuses on a different time, specifically the beginning of O'Keeffe's relationship with photographer and future husband Alfred Stieglitz. The scene where Stieglitz's wife catches the two of them in bed was poignant. And it was interesting to see how O'Keeffe's artistic vision evolved and grew in the subsequent scene as she and Steiglitz struggled to make ends meet.

See you all at our next meeting on Monday, April 13!
Posted by Todd Wallinger at 3:02 PM 0 comments