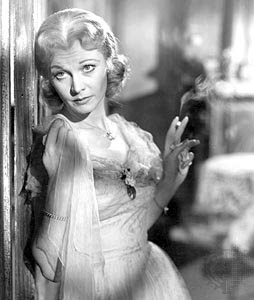 We all know that meaty roles for older women can be hard to find. Well, Ashley Crockett wants to do something about it. At Monday's Drama Lab meeting, this veteran actress of countless local productions announced that she's launching her own playwriting contest.

Plays can be any length, but the role must provide challenging, meaningful roles for older women--the more, the better. Ashley wants roles that go right to the edge, that are new and different and not at all predictable.

Two classic roles that represent what Ashley is looking for are Martha in Who's Afraid of Virginia Woolf? and Blanche Dubois in A Streetcar Named Desire.

The winner will get their Drama Lab dues paid for one year (a $25 value). The deadline is August 31.

If you're interested in submitting something, bring a hardcopy to one of our Drama Lab meetings. Or email it to me and I'll see that Ashley gets it.

Bachman and Summerville are back! 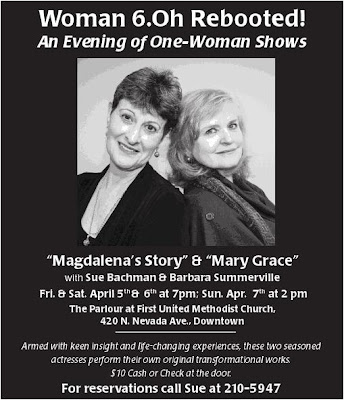 These are original works based on characters they've been developing for years. I'm sure you'll love their funny and emotionally moving stories.

Please come out and support these two talented actresses/writers!
Posted by Todd Wallinger at 6:02 PM 0 comments

I don't how much longer we can keep outdoing ourselves, but we certainly did it again last night. It was just a fabulous, fabulous meeting, with hilarity and heartache and every emotion in between.

Although it ran close to three hours, no one wanted to leave when it was finally over and several of us hung around for quite a while to chatter on about the amazing plays and performances we'd just witnessed.

We had a total of five plays and eighteen attendees, with three new actors joining our happy clan. Welcome aboard, Ashley, Marisa and Hannah! We look forward to seeing more of your work in the future.

This also means we now have eighteen dues-paying members--six more than I originally aimed for when we started collecting dues last September. All of the money raised through dues goes to the Millibo Art Theatre so we can take satisfaction in knowing that we're helping to support their wonderful work as well.

I'll be teaching a class on playwriting at this year's Pikes Peak Writers Conference (April 18-21). I plan to promote our group there, so prepare for a new influx of writers in May, That is, if I don't scare them away from playwriting in the first place.

One nice surprise last night was that we had a special guest. Charlie Ammen brought his sister, Sharon Ammen, who happens to be head of the theatre department at St. Mary-of-the-Woods College in Indiana. Her insightful, constructive comments were a highlight of the evening, and she even asked some of the playwrights to send her their scripts, saying that she might be able to get them to "people".

Can we take up a collection to fly her out here every month?

We started with Phil Ginsburg's short comedy, People on the Page. This is a very clever piece in which a struggling playwright's plot and dialogue became personified and battled with each other and the characters over which direction the play should go. Lots of fresh, original humor here.

We followed that with the next part of Tim Phillips' 80's girl band drama, The Decibelles. These scenes uncovered new conflicts in the now middle-aged women's lives and Tim ended the section with an original song that was quite touching in its honesty.

After that we read Sue Bachman's hilarious Fantasy Reunion, a short comedy about three women going back to their high school reunion to pick up guys. Here, Sue once again showed her flair for creating unique, well-drawn characters.

Next up was Katherine Gee Perrone's Selkie, a full-length musical based on the Scottish folktale of the Seal Wife. We didn't quite get to the end, which is a tragedy as this was Katherine's last meeting with us, but I know we all enjoyed the lyricism and the beautiful heartache contained within the scenes we did read.

We'll miss Katherine, but we wish her well and are confident she'll find a new playwriting group soon. After all, she was told Seattle has as many playwrights as coffee beans.

We finished up the evening with the next section of my cocktail party farce, Butterfly Effect. I'd reworked some of the action (I traded Roddy's gangster costumer for a Nazi costume) and I was really pleased with the results. People responded really well to the humor and I'm confident now that the play is headed in the right direction.

One reminder: next month's meeting is pushed back a week because of the rehearsals for the Six Women Playwriting Festival. We'll meet on Monday, April 15, same MAT time, same MAT channel.

See you then!
Posted by Todd Wallinger at 6:21 PM 0 comments