We had a very lightly attended meeting last night with only seven people showing up, although that included one very talented new actress, Kelly. The attendance was low largely because my play The Last Radio Show closed on Saturday and the cast and crew--many of whom are members of the Drama Lab--were at home recovering from the intense two-week rehearsal period or illness or both.

The number of scripts was down too. We read just three, opening with a rewrite of Grant Swenson's Balance, a short play about a woman engineer struggling to deal with the stress of her job. One of the ways Grant revised the play was by changing the lead character from a man to a woman. The audience liked this change as it seemed to make the character's struggle more realistic and poignant. Grant also added a few touches of comedy to relieve the tension.

Next up was a rewrite of Barbara Summerville's Huckleberry Pie, a short drama about a cantankerous old woman who has lost the will to live and tries to talk her niece into poisoning her. Barbara moved the story elements around quite a bit and added a scene at the end in which the niece has a conversation with her aunt after she dies. People found the play quite moving, especially the way the characters bonded over their singing of some old familiar songs.

We wrapped up with two more scenes from my Frank Capra-inspired comedy Trouble in Paradise Junction. Here we see the townsfolk ignore the lead character's protests to approve a shady contract with a TV reality show. The audience liked the humor and thought that the story effectively portrayed the small-mindedness of small town people, though I'd like to keep that portrayal a fond one.

Our next meeting is Monday, February 8. See you then!
Posted by Todd Wallinger at 5:57 PM 0 comments 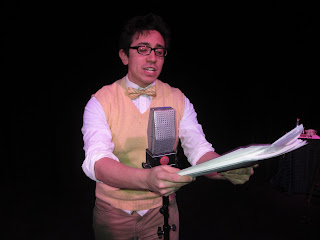 Tonight is the world premiere of my newest play, The Last Radio Show. It's a fast-paced farce about KUKU, a struggling radio station in the 1940's, and the mysterious series of "accidents" that threaten to shut it down for good. I brought the script to several meetings of the Drama Lab last year, and the members were hugely helpful in making it better.

Tickets for the two Saturday shows are going fast. To order yours, visit Brown Paper Tickets.
Posted by Todd Wallinger at 2:26 PM 0 comments