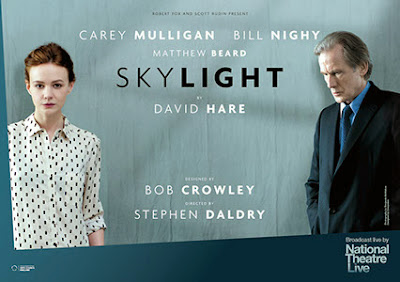 As you know, I've been pushing TheatreWorks a lot lately because I believe that we need to support them as much as they've been supporting us. I've heard back from some of you and it seems that cost is the main factor preventing you from seeing more shows.

Which is why I'm happy to promote this weekend's NT Live event through TheatreWorks. NT Live is this amazing program that broadcasts videotaped recordings of recent (read: this season's) productions from London's National Theatre.

It's the best of both worlds. The National Theatre is the official state-sponsored theatre of the UK and it's truly one of the great theatre companies in the world. But because it's a broadcast, the price is cheap: just $15 a pop.

I've been to several of these and I have yet to see a bad production. The plays often feature big name actors, and the camerawork is top-notch, giving you a better-than-front-row-seat view of the show.

This weekend, TheatreWorks will present the latest addition to the series: David Hare's Skylight, a romantic drama featuring Carey Mulligan and Bill Nighy. For the full scoop, click here.

The broadcast is at Centennial Hall on the UCCS campus. Times are 7pm on Saturday, November 15 and 3pm on Sunday, November 16. And no, you don't need to buy tickets ahead of time. There will be plenty of room.

If you're serious about being a playwright, there's no better, cheaper way to know what kind of plays theatre companies are doing today.
Posted by Todd Wallinger at 5:10 PM 0 comments

Well, we only had seven people show up for a meeting last night, the second lowest number since our second meeting three years ago. But then people had a good excuse. The first winter storm of the season hit late in the afternoon, plunging the temperatures into the mid-teens and turning the roads into skating rinks. Still, we soldiered on, and the die-hards who did show up were able to get through six plays.

We started with Chuck Cabell's 10-minute comedy, A Priest, A Rabbi and a Horse... I missed most of this because I was tied up in traffic, but everyone seemed to love the humor.

Next up was the beginning of Sue Bachman's family drama, Having Faith, with Sue again finding inspirations in the travails of her childhood. In it, a young woman tries to help an old woman banished to her dark, drafty apartment by her adult daughter. Everyone enjoyed the dramatic tension but wondered whether the daughter was too unlikable.

After that, we read the beginning of Tim Phillip's religion drama, Christian Death. It's about a fundamentalist pastor forced to confront his past when his wife and former followers turn on him. It's a great concept, but people thought Tim should up the stakes, making the pastor a child molester or something instead of just a distant, judgmental clergyman. I also thought the pastor shouldn't be so passive when his accusers first confront him.

Next we read the first scene of my drama Final Edition. This was a script that I started years ago as my eulogy for the newspaper industry, but subsequently abandoned. People liked the punchy dialogue, although people thought that the interplay between the editor and the crusty crime beat reporter should have been more smart assy.

We followed that with the start of Jess' Weaver's drama, which for now remains titleless. Jess intends to submit it to next year's Rough Writer's contest at the Colorado Springs Fine Arts Center, which is asking for plays related to Georgia O'Keeffe. Jess has never liked O'Keeffe's flower paintings so she decided to write a harrowing tale of kidnapping and drugs inspired by the artist's paintings of skulls and desolate desert landscapes instead. The audience loved the tension and theatricality of the piece (at one point, an hallucination of a giant jackalope makes an appearance) and we all look forward to seeing the rest of the play.

We wrapped up, appropriately enough, with the finale of Chuck Cabell's full-length comedy Diabolus Ex Machina. People loved the irony of the ending, in which the fictional playboy character accepts the novelist's original vision of him as a kindly Alpine woodsman (a la Heidi's grandfather) only to have Heidi rebel against her role. I thought, however, that it wasn't a strong choice to have the characters spend the entire play inside the computer. They should come to life outside the computer so that they can mess up the novelist's life in a visual way.

Our next meeting is Monday, December 8. See you all then!
Posted by Todd Wallinger at 10:43 AM 0 comments

Two years ago, the Colorado Springs Fine Arts Center launched a new playwriting contest which promised a full production to one full-length play and one short play. And although the contest attracted submissions from all over the country, it was won by two Drama Lab members: Marisa Hebert and Sue Bachman.

Well, the contest is back with a new theme and new rules. Here's the scoop:

The theme for this year's FAC Rough Writers New Play Festival has just been announced. As part of the FAC's "Year of Georgia O'Keeffe", this year's submissions should be related to the life and/or work of O'Keeffe. The plays may utilize Georgia O'Keeffe as a character, use her art as a springboard for the story, or, in a larger sense, explore the lives and art of groundbreaking women.

Submissions for this year's festival are due March 1. The submissions may be full-length, one-act or 10-minute plays or musicals. Submissions must be in a state of development and not have a history of productions. The Rough Writers New Play Festival will be held between June 4 and 14, 2015.

Please send cover letter and copy of formatted script (along with demo CD for musicals) to:

or via email to: